Liverpool handed Arsenal a reminder of the gulf they have to bridge to compete with the Premier League elite by ending the Gunners’ 10-game unbeaten run with a 4-0 thrashing at Anfield.

The Reds’ front three of Sadio Mane, Diogo Jota and Mohamed Salah were all on target before substitute Takumi Minamino set the seal on a return to form for Jurgen Klopp’s men after losing for the first time in 26 games in their last outing at West Ham.

Victory lifts the Reds up to second and within four points of leaders Chelsea.

Klopp was at the centre of a heated argument with Arsenal boss Mikel Arteta that woke Liverpool from their slumber of the opening half-hour.

Visibly riled by the Spaniard, Klopp conducted the Anfield crowd with delight once Mane opened the floodgates six minutes before half-time.

“The Arsenal bench went up like it was a red card. I asked what they want in that situation,” said Klopp. “I’m really sick of these situations where everyone goes for Sadio.

“We had to take Sadio off against Atletico (Madrid in the Champions League) because they wanted him to get a yellow card. It’s just not right.”

Arsenal’s three-month unbeaten run since their worst start to a league season for 67 years has hauled them to within three points of the top four.

But they had not faced a side in the top seven of the table in that sequence and suffered another lesson on how far they still have to go to compete with the Premier League’s best after heavy defeats to Chelsea and Manchester City earlier in the campaign.

“At the moment they are better than us,” admitted Arteta. “We threw the game away in 15 minutes after half-time.”

The visitors had started well until Arteta undid much of his side’s good work as the two managers became embroiled in touchline spat that lit Liverpool’s fire.

There was no punishment for Mane, but both coaches were booked for confronting each other.

The Reds were reenergised as Aaron Ramsdale had to continue his fine form to deny Salah and Trent Alexander-Arnold.

Liverpool then started the second period with the urgency they lacked in the opening stages as they constantly hounded Arsenal into mistakes deep inside their own half.

“The first 20 minutes of the second half were as good as we’ve pressed all season,” said Alexander-Arnold. “We were all over them — they were just seeing red blurs all over the place. That second half was outstanding.”

Nuno Taveres was the culprit for the killer second goal as his sloppy pass teed up his compatriot Jota, who coolly left Ben White and Ramsdale on the floor before tapping into an empty net.

Ramsdale earned his first England cap in the 10-0 demolition of San Marino on Monday as the Three Lions booked their place at the World Cup in Qatar.

The 23-year-old is making a strong case to dislodge Jordan Pickford as Gareth Southgate’s number one and kept the score respectable for Arsenal in the closing stages with another fine save from Jota.

However, he was helpless as Liverpool struck twice in four minutes at their counter-attacking best.

Jota’s flick freed Mane down the left and his cross was tapped home by Salah for his 16th goal in as many games this season.

Salah was involved again for the fourth goal as he teed up Alexander-Arnold to fire in a low cross that only required a simple tap-in from Minamino. 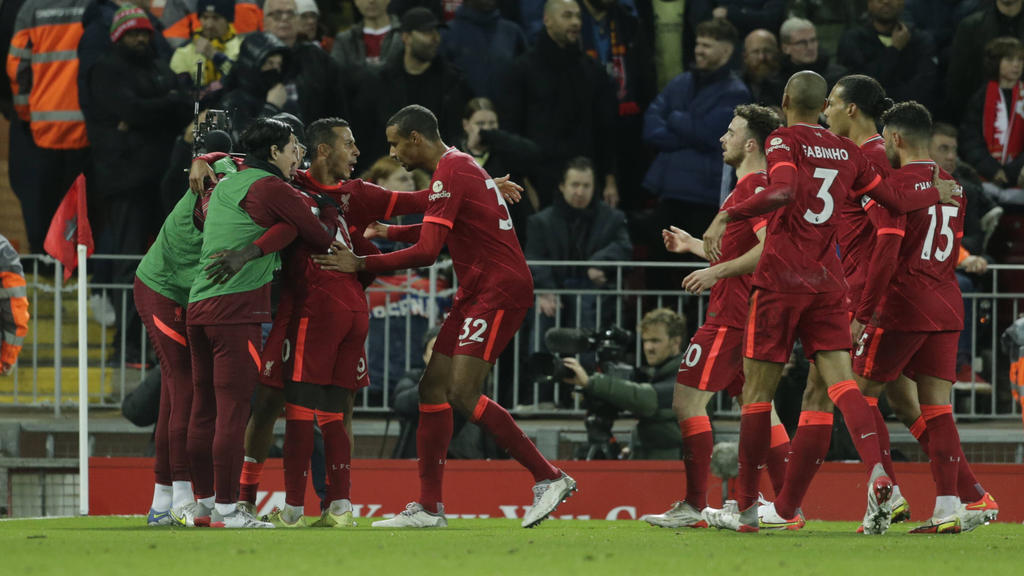